Murales Sherbrooke About us An open air art gallery!

The Sherbrooke Murals Circuit is the first of its kind in Canada, and transforms the downtown into a true street museum. From wall to wall, the city’s art, history and culture comes alive. Whether summer or winter, take a leisurely stroll through the streets while discovering a museum, a good restaurant or a microbrewery. 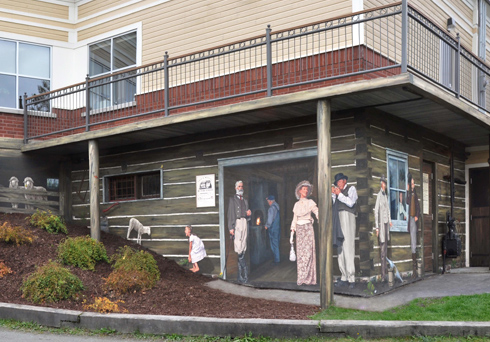 Your best place to start, this mural is located at the Sherbrooke Tourist Information Office.

Featuring an area once known as the “Upper Mills,” this mural harkens back to the business that were located here in 1867. Located about 100m from the building, the stairway that leads to the Magog River Gorge takes us back to this period. 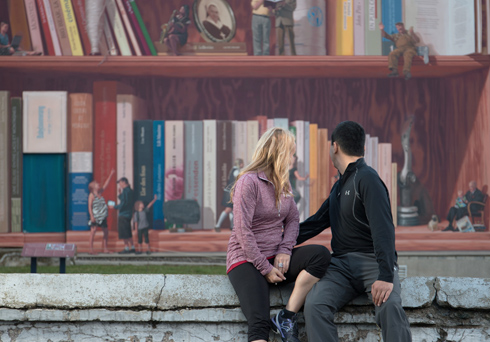 2 minutes from the Lac des Nations Boardwalk, a 3.5km loop that connects the Marché de la Gare and the Jacques-Cartier Park.

An impressive trompe-l’oeil that allegorically represents the source of our wealth; our “city of knowledge.” A metaphor of our literary universe in which over one hundred regional authors are represented. 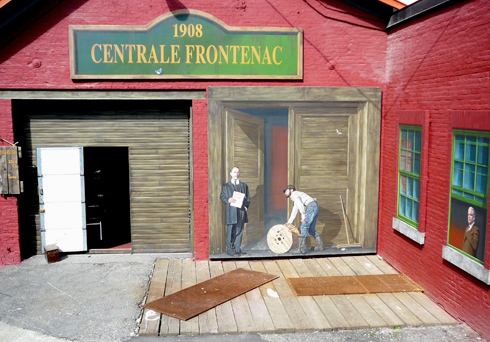 100 years at your service

This mural commemorates the centennial of the municipalization of electricity in Sherbrooke. On May 1, 1908, the City of Sherbrooke acquired the Frontenac power plant and the assets of the Power Light & Heat Co., the sole energy producer and distributor at that time.

After a fourth referendum on the issue, and after nearly six years of work by city councillors Daniel McManamy and Donat Denault, this public service was born, making Hydro-Sherbrooke one of the city’s proudest symbols.

Open during summer only. 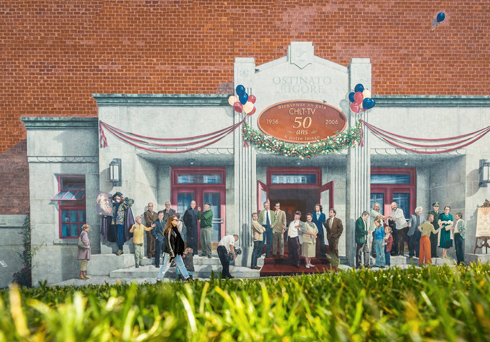 CHLT-TV, 50 years of looking at it our way

Directly across from the Sherbrooke Nature and Science Museum, why not stop in for a visit?

CHLT-TV (Channel 7) celebrated its 50th anniversary on August 12, 2006. In 1954, Senator Jacob Nicol obtained a license to operate a bilingual television station in Sherbrooke. The mural features 30 well-known cultural personalities from yesterday and today, brought together to celebrate the 50th anniversary. 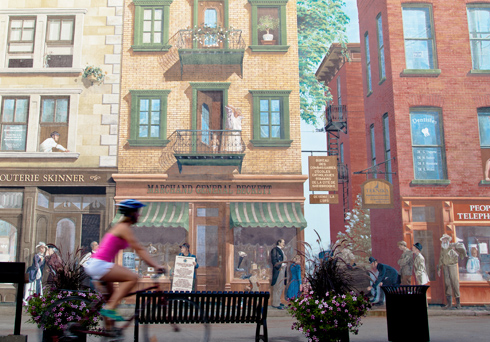 Close to the Sherbrooke Fine Arts Museum and the Société d’histoire de Sherbrooke where you’ll discover interesting and diversified exhibits there.

It was on the 200th anniversary of the founding of the city of Sherbrooke that the first trompe-l’oeil mural was inaugurated. This scene looks as if time stood still on the sunny afternoon of June 2, 1902. Some 23 characters are realistically represented. 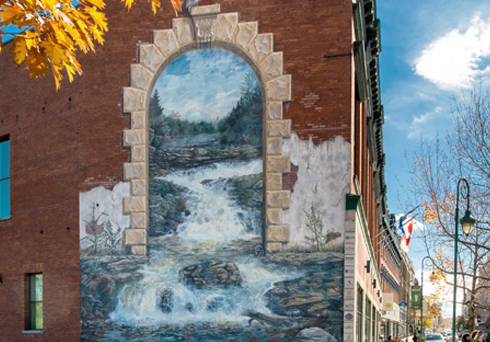 On the other side of Wellington Street, you’ll find City Hall, in front of which several free outdoor musical performances are held throughout the summer!

This mural shows the junction of the Magog and St-François rivers as the Abenakis would have once seen it. Nekitotegwak means “where the rivers meet”. This is where Sherbrooke’s first settlers made their home. 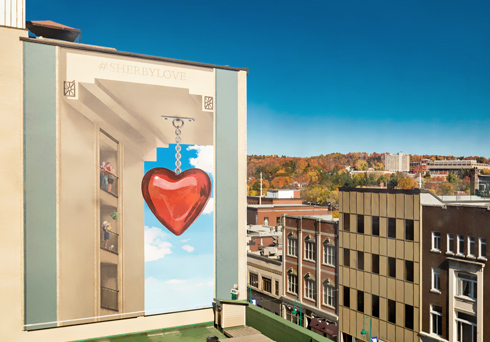 Visible from the corner of King-Wellington. You’ll have to look up as the mural is up high.

This mural’s essence is 15 feet wide and our era needs it more than ever: rabu, liebe, alhab, ài, agapé, lûbov, pyara, amor, amour...love! This is the open-minded and universal symbol we want people to remember from Sherbrooke. #Sherbylove is the reflection of Sherbrooke’s residents love and attachment to their city. 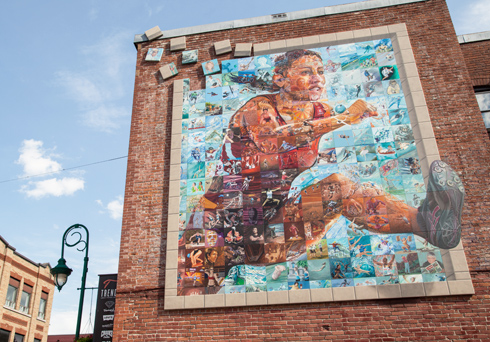 In the heart of the downtown area, you’ll find good restaurants, terraces, cafés, and boutiques nearby.

This mural is a collective effort, produced with the participation of 111 local and national artists from all 13 provinces and territories participating in the Sherbrooke 2013 Canada Summer Games... in other words, artists from sea to sea. This mural project is made up of 224 panels assembled in a single composition that, once put together, represents a single trompe-l’oeil image. 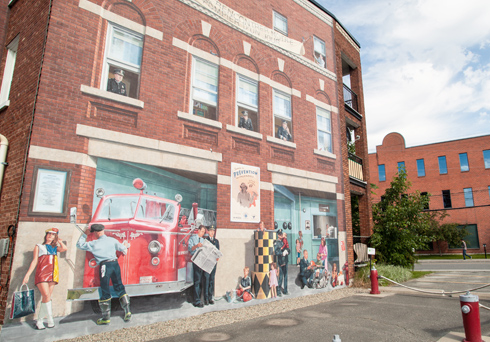 A few steps from the St. Michael’s Basilica-Cathedral

This mural honours the firemen and policemen who have been keeping the people of Sherbrooke safe since 1852. The west wall of the building is a symbolic representation of the old central fire station, featuring 25 characters. 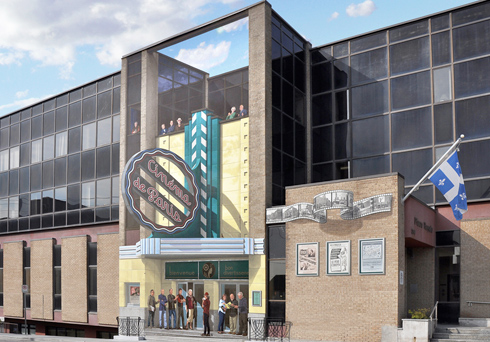 We are in the movies

356, King Ouest street (at the corner of Camirand street) • 2017 inauguration

This mural’s challenge was to create the Cinéma de Paris sign as an anamorphosis, as the mural was created to be seen from an angle at the corner of King and Camirand Streets.

This fresco pays homage to many builders, promoters and creators who played a role behind and in front of the screen. Sherbrooke movie history is almost as long as cinema’s. In December 1896, the residents of Sherbrooke could watch the first cinematographic projections provided by the Lumière brothers. Since then, several movie theatres have been the meeting places for Sherbrooke’s cinema lovers, including the Cinéma de Paris, the one illustrated here which closed its doors in 1987. The original site was located a few short steps from the mural’s location. 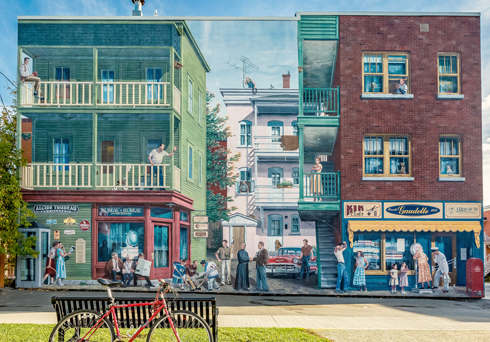 This mural is a homage to the Southwest Sherbrooke neighbourhood known as “Le Petit-Canada,” once inhabited by French Canadian labourers. Representing the daily occurances of September 27, 1957, this neighborhood was linked to the textile, mechanical engineering and metallurgy industry. It was mostly composed of large families during the post-war baby boom years. 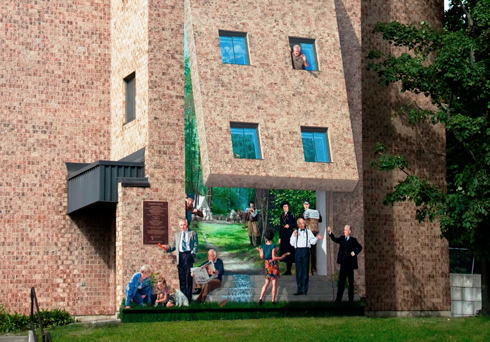 This huge trompe-l’oeil depicts the historical origins of the neighbourhood. It’s only a few steps from there that the first land clearings occurred in Sherbrooke, then referred to as Ascot Township. This mural, with its forced vanishing point, seems to pivot the wall back to the lands and forests of 1792, then to progressively return to today’s urban surroundings. 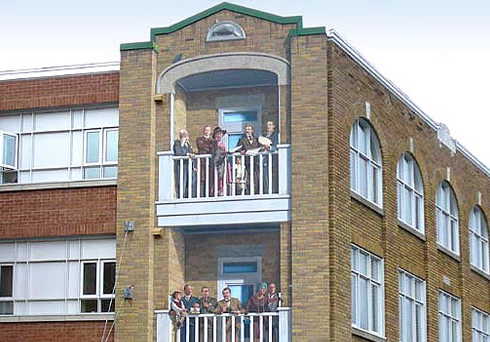 A few steps away from the Terminus Vieille Gare de Sherbrooke. (Bus station)

This mural is a reminder of the city’s former hotel district. The mural symbolically illustrates the Traveler’s Lodge. Built on du Dépôt Street around 1910, this small and modest hotel was popular with travellers in transit through the city. 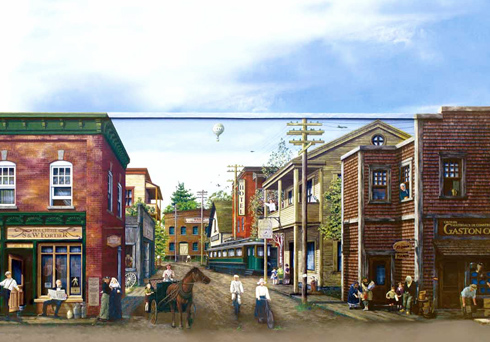 Progress in the east

Located at the corner of King E. Street, this mural features business establishments that once stood nearby, such as Pamphile Biron & Son and Ressort Déziel. We also note a few political personalities, namely Stanislas Fortier, the first French Canadian mayor of Sherbrooke or William Bullock Ives, Member of Parliament for Sherbrooke and Minister. The many details tell us about the lives of people at the end of the 19th century. 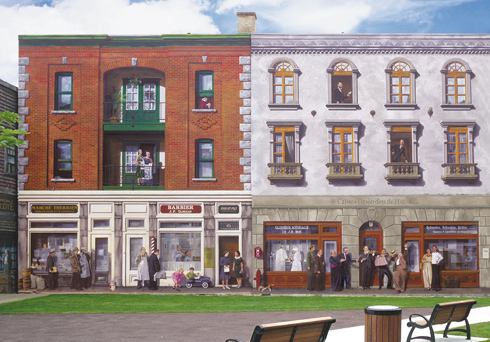 Once upon a time in the east 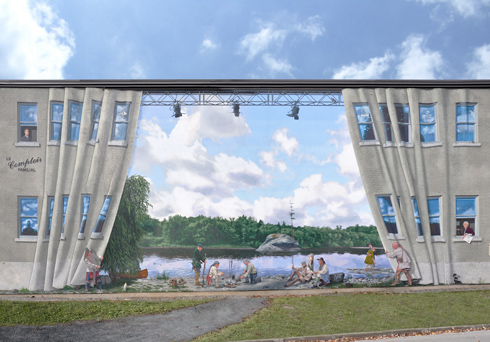 This mural represents historical facts and legends from the Sherbrooke area. It is a purely fictitious representation.

In the foreground, First Nations representatives are opening a huge curtain. Most of these characters represent people once well known, long before the creation of Hyatt’s Mill (the name of the first village that later became Sherbrooke).

The characters are represented here on the shores of the St-François River, directly in front of a regional historical symbol – the legendary Lone Pine Rock. 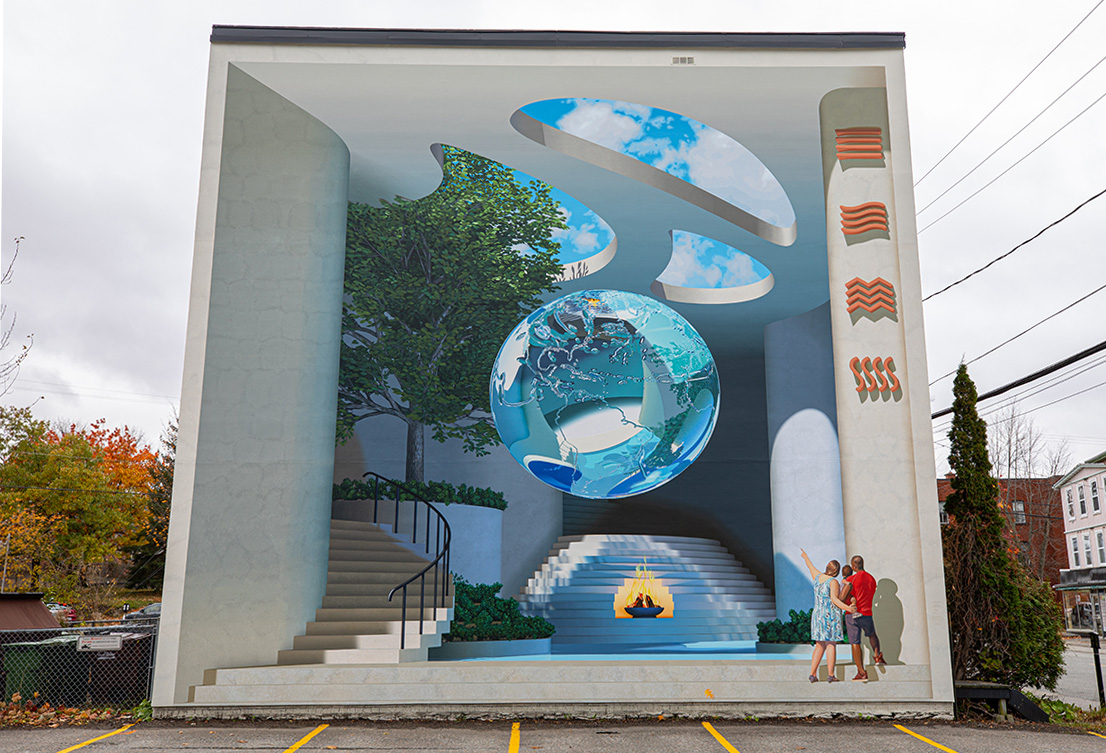 The Fifth Element is based on the themes of universality, internationality, inter-community, environmentalism and oneness. For this mural, MURIRS worked with the German artist Steffen Jünemann, a master of trope-l’oeil art. The Fifth Element is different from the other murals in the circuit as its focus is more on the present and future rather than on Sherbrooke’s historical past.

This calm and relaxing mural symbolises the four elements found in nature – fire, earth, water and air. Spectators represent the fifth element. Each visitor is invited to immerse themselves in this peaceful environment, becoming an integral part of this mural. 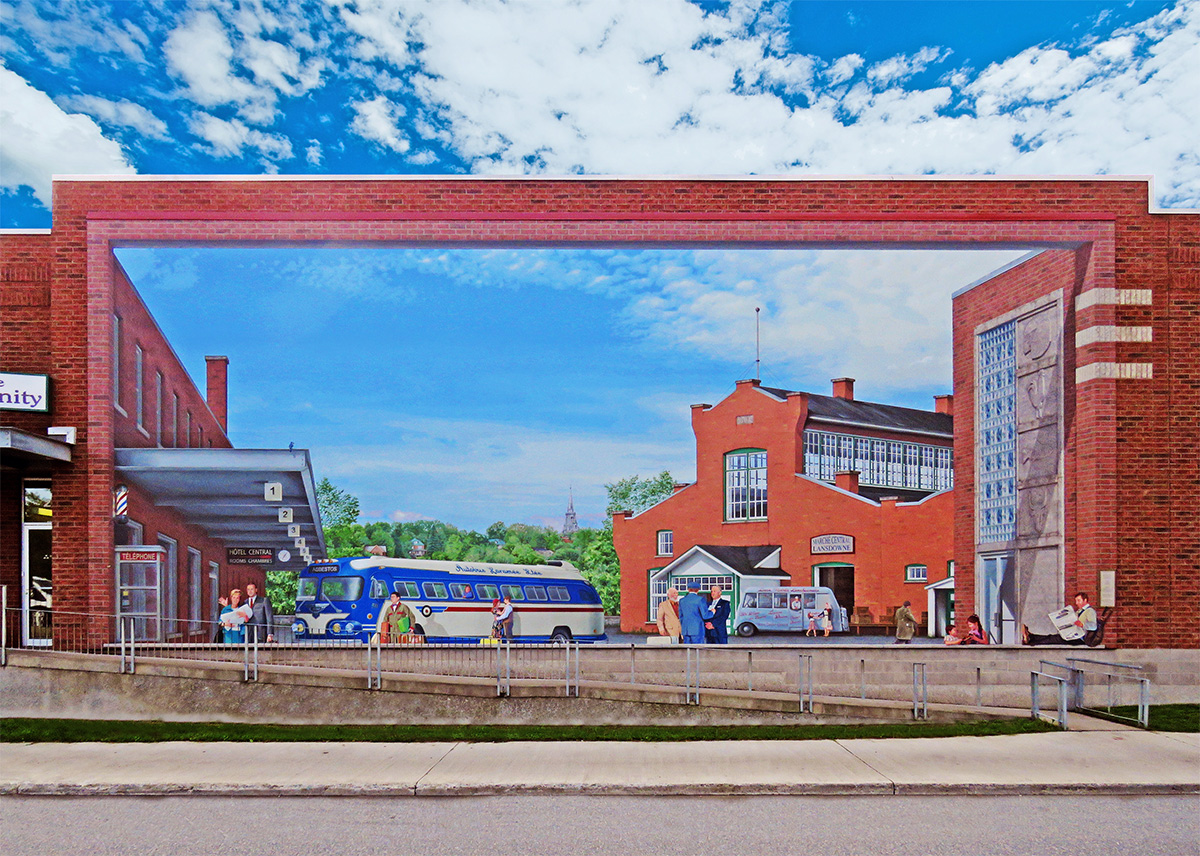 The intersection of the mythical King Ouest and Rue des Grandes-Fourches has seen thousands of people arrive in the heart of Sherbrooke.

Terminus and Populus presents the arrivals and departures at the Sherbrooke bus station, which was previously located at the same spot. Also included in the mural, the Landsdowne Market was where local residents went to buy regional products.